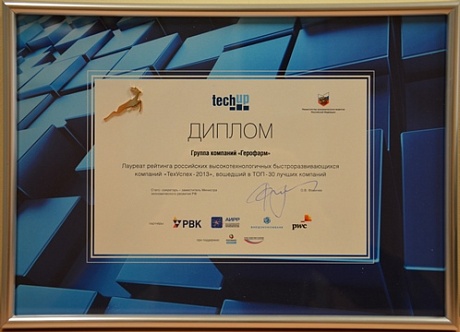 GEROPHARM Enters the Top-10 Russian Companies according to "TechUp" Rating

GEROPHARM, Group of Companies, entered the Top-10 largestcompanies according to the national rating of Russian high-tech fast developing companies "TechUp-2013". This year, the results of the rating confirmed the correctness of the last year assessment, when the company entered the Top-30.


The innovative companies rating "TechUp" is the first rating of high-tech fast developing companies in Russia. It was found in 2012 by RVC OJSC, the Association of Innovative Regions of Russia (AIRR) and Vnesheconombank together with other development institutions of the Russian Federation. This year they were joined by the audit-consulting network PwC that has developed a rating methodology aiming at presenting the Russian high-tech companies on the global market.


In 2013 the rating was made for the second time. The nominees were chosen based on the growth rates, costs for technology innovations and R&D, innovations and technological level of the products manufactured. The award was traditionally held as part of the Moscow International Forum of the Innovative Development Open Innovations.


“The companies entered this rating are the ascending stars not only of the Russian business but of the international one as well. Such companies should be spoken about. Not all companies in Russia could do what they have done: To turn new knowledges into the money,” says CEO of the Association of Innovative Regions of Russia I.M. Bortnik. “The growth of innovative activities is the main indicator of the innovative sector development in the whole country as well as in every region.”


The development strategy of GEROPHARM is based on a comprehensive approach. The principal aim is to release innovative medical products of high quality to the market, to replace the import and to make contribution to the Russian pharmaceutical market making it more clear and effective. “We hope to make our own contribution to the Russian pharmaceutics development and to create technologies for the healthy future by releasing new products to the market or implementing innovations,” says General Director of GEROPHARM Group Pyotr Rodionov. “Moreover, while developing the new drugs we plan to release them not only in Russia and CIS, but on the other markets as well.”


By analysing the sectoral structure of the rating winners one can note that most of them deal with IT and communications, engineering, instrument making and electronics. The companies working with pharmaceutics and medical technologies are on the third place.